Round 9 of this years DTM Championship was held at Russian Moscow Raceway.

Rene Rast in Audi R5 DTM started from Pole Position ahead of brand colleague Mike Rockenfeller, who made a sensational comeback, with a broken foot, after his crash with Gary Paffett at the last round. Augusto Farfus in BMW started third ahead of teammate Timo Glock. Then followed by Mattias Ekström ahead of the real Poleman Marco Wittmann, who had a 5 places grid penalty due to his third offence during the year at Norisring.

It was a very chaotic start. There were plenty of contacts between cars in turn one, and then at turn 3 we saw even more drama. Timo Glock pushed Mattias Ekström off the track, and send Eki all the way down to 11th, before he had control over his car again.

Augusto Farfus made a move on Rockenfeller on lap two, and hit the rear of the Audi. Farfus received a puncture, and fell to dead last in the field. Race control gave Rockenfeller a warning for too aggressive blocking.

Several drivers decided to take an early pitstop. Paul Di Resta, Edoardo Mortara and Maxime Martin pitted on lap 1, while Mattias Ekström and Tom Blomqvist chose the third lap, as well as Farfus due to his puncture.

Marco Wittmann and Timo Glock had several close battles, with some aggressive moves against each other. No further action was warranted to either of them. 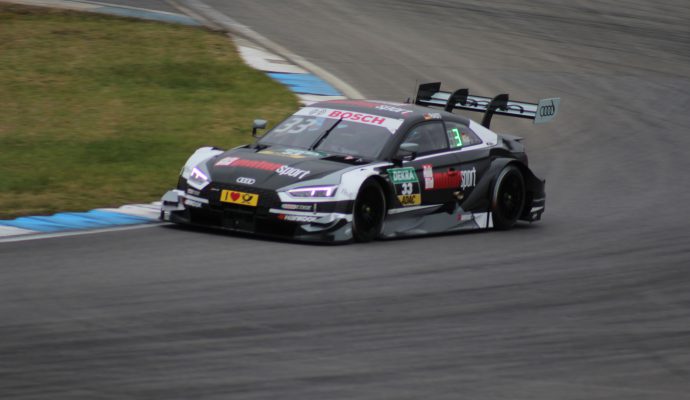 On lap 15 we saw Rockenfeller dive into the pits, and one lap later we had Rast coming too, and then he could retake the lead of the race, ahead of Rockenfeller and Wittmann.

Lucas Auer slowed Mattias Ekström going down the straight. That meant Jamie Green got past, before Gary Paffett dived past the Swede too. His Audi R5 DTM was looking more and more like a well used Rallycross car, after all the competitors had hit him.

After the first half of the race had been done, the action slowed down quite a bit.

Robert Wickens showed some Mercedes pace for the first time this weekend, and overtook Marco Wittmann in the battle for third. Wickens had started 11th, so it was a great achievement to gain so many positions by the Canadian.

Tom Blomqvist had to retire 20 minutes before the end of the race, after receiving so much damage during the start of the race, that it no longer drove normal. He was already last in the field, so he went on to retire, to not use more of the material.

Paffett continued the rough driving and pushed his way past Jamie Green, in the battle for 7th with a very robust manoeuvre.

Rockenfeller was a good team player and drove behind Rast through the last half of the race, even though he seemed to be faster. Rockenfeller is further back in the Championship than Rast, and with a victory, it could send Rast back in the lead.

With 9 minutes left of the race, the top 4 started to come back together. Wittmann had got some new speed, and caught Wickens with several tenths per lap. He managed to get past the Mercedes man again, and then started chasing the two leading Audi’s.

But he didn’t have anything left in the tires, so Rene Rast could secure the victory ahead of Mike Rockenfeller and Marco Wittmann.

The second round of the weekend will be run on Sunday afternoon.