As the sun disappeared from view, Earl Bamber’s lead was being heavily compromised by bad luck through the slow zone timing; still over 10 seconds but the team having to think carefully.
#50 KRS Porsche was running slow in Metzgesfeld, but able to get back to the pits.
Gigaspeed have been having a rough time of it so far; now just to compound it the #59 has to be bought in with gearbox trouble.

Only 7 hours into the race, and the pit garages are incredibly busy; the next victim was the #94 VW Golf the driver reporting a vibration.
In previous races, the Glickenhaus has started strong before fading away – so far, they seem to be doing the opposite with an almost anonymous run but secure in the top 10.
Bernd Schneider, but also his journalist team mates, deserve a lot of credit – the Mercedes GT4 comfortably the best of the rest in 25th overall.

Looking through the timing screens, #149 KRS production class V5 Cayman was setting respectable lap times on a pace with SP3 & BMW cup cars running in 89th overall.
Mercedes #11 With Raffaele Marciello behind the wheel hit something out there, as evidenced by a broken rear wheel.

Fire in the pits – #22 Ferrari ablaze, but total professionalism by the crew getting it put out quickly & after a quick check, the car sent on its way.

The #109 Ford Mustang running bio-fuel may not be quick (unable to match even the production class cars), but it has been running steady and 8 hours into the race is still hanging inside the top 100.
In the production category, it is the V6 class #138 Black Falcon still on top in 75th overall 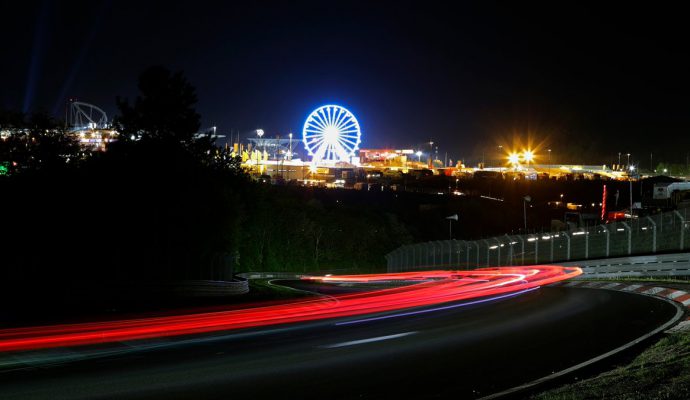 Despite all the earlier trouble, good to see that Supaphongs was continuing in the Thai Toyota Corolla – the car was still circulating as the clock struck midnight.

#42 Lexus into the pits for what initially looked like a planned brake change, but the team were spending far too much time, the SP8 car falling behind the TCR leaders – which at this stage of the race seemed to no longer involve the Hyundais (both with lengthy repairs due to punctures).
TCR now being headed by the #175 Audi RS3 driven by Christoph Breuer

Another car that has been having a torrid time of it, the #11 now seen at a stand at Kesselchen.
Slow zone in the Hohenrain briefly, but just to allow rescue of some debris.

WRT Audi seen losing a tyre, but not as dramatic as Maxi Gotz in the #48 Mercedes who made a standard pit stop, but as soon as he rejoined the track, a rear wheel flew off pitching him into the gravel.
Unbelievably, the mechanics took it upon themselves to run out onto the live track to provide assistance.

Next we saw #75 Bernhard Porsche into the garage with suspension failure.
The alternatively fuelled Dodge Viper was next to fall, going off at pflanzgarten and dropping fluid across the track – about a minute later, the #911 would come past the scene hit the fluid and Romain Dumas would exit stage right. Manthey unable to retrieve the car and would instead be down to one Grellow machine.

Lighting dancing across the sky in the distance, getting everyone’s attention – nerves starting to rise in the pits and in race control.
One team that were doing a rain dance, of course was the Subaru squad #90 just about leading their class but delayed and down in 85th.

Although the car was way down the order, a no nonsense attitude taken with the #247 BMW & the team thrown out of the entire meeting for dangerous driving under a slow zone

Nicolaj Möller Madsen driving the #41 Audi GT4 pulled off at the end of the start/finish straight, rescue vehicles on site but looks like the end of the road.

At 02:00 the battle at the head of the field was still Porsche-Merceded-Audi-Aston Martin

And the rain begins to fall – pretty much all the leaders come in straight away to switch tyres.
The weather has conspired to bring the battle for the lead together – Lietz driving #912 ahead of #4 Manuel Metzger nose to tail.

David Thilenius in the #39 Aston Martin GT8 seemed to be having a good time in the wet, down in 62nd but several seconds faster than those around him.

#4 Black Falcon Mercedes into the lead, sneaking past the Manthey Porsche at Wehrseifen and a slow lap for the #007 Aston allows Daniel Juncadella through into 3rd.

#177 Altran TCR Peugeot has skidded off at Ex-Mühle, amazingly bringing out the first significant slow zone since the rain started.

Half distance & the #242 Adrenelin BMW M235i was being pushed down the pit lane out of the class lead, Christopher Rink looking annoyed more than anything.
The #39 Aston Martin off at Hatzenbach, it seems that as the rain is easing the drivers are finding it more difficult to judge the conditions.

#96 SP7 Porsche was the second DQ of the race, again for behaviour under code 60.
The all Argentinian crewed #255 BMW cup car hit the barriers at Kesselchen and would not be seen again.

The Glickenhaus was the next to visit the scenery, Metzgesfeld catching Mutsch out, the car was able to survive however – still definitely on for a top 10 finish.

It was a trying time in the rain for the SP-Pro Lexus & although Tsuchiya would keep running, the team would be well outside the top 100 – things were marginally better for the SP8 #42 which was recovering and hopeful of the top 50.

In the early stages of the race it looked like the TCR class would be a Hyundai benefit, but through a series of minor issues they had fallen well down the order. Peter Terting though would not give up & the #831 would emerge from the darkness in 3rd on the lead lap & 30 seconds faster than the competition.

Definitely daylight now, the rain continued to fall but not in the biblical levels that were threatened as we began the final 8 hours.