As daylight broke, the first bit of bad news went the way of Ricky Collard – having to bring the #60 BMW GT4 in for major attention of the electrical kind.
Next would be the #123 Toyota Thailand car, more engine woes; but they have got this far so they were in no mood to quit – a couple of improvised repairs and the car was sent on its way.

The #90 Subaru was still loving the conditions Takuto Iguchi looking like being able to catch the SP10 leader by the end of the race.

It was a troubled night for several runners, which has allowed over a dozen production cars into the top 100 with 7 hours still on the clock 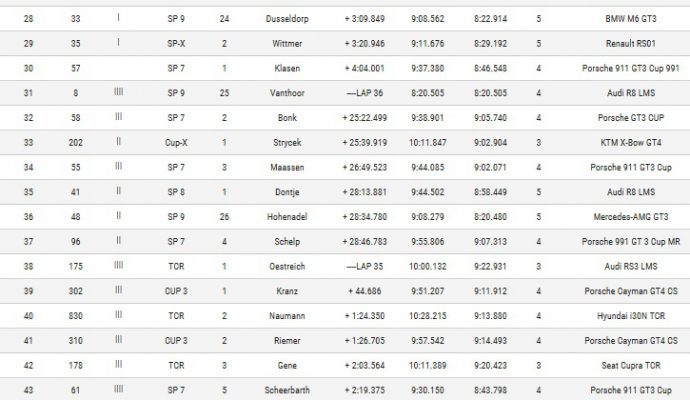 Slow zone at Brünnchen as the #136 Cayman has slid off into the barriers.
Then the sad sight of mechanics signing cut throat motions to Peter Terting as the Hyundai is pushed into the garage.

Left rear tyre blow out and heavy damage on the #176 FEV entered Seat Cupra TCR – the driver trying to get it back home, but having to be super careful as he is all the way back at Flugplatz.

#77 Ford Mustang of Stephan Wölflick was running strong 6 hours remaining 2nd in class and inside the top 50 – looking at their lap times, it is safe to say that this is not a car that suits the Nurburgring, but the team have been steady and reliable so far.

The #78 Kroll family BMW off at Kallenhard, looks like suspension failure.
Renault Clio #129 pointing the wrong direction at Breidscheid, definitely made contact with another car – the scrape marks are unmissable.

Nett has stopped the #175 Audi out of 2nd in TCR at Brünnchen – if he doesn’t get moving soon, the Hyundai #831 will get back past.

Cayman #310 rattled off into the gravel at turn 1, hitting the Armco and with a damaged front corner won’t be getting back out.

Down in the Cup-X class, the all female crewed car was in 2nd place and holding a position in the top 40 overall – the class leader too far away to be a realistic target but Naomi Schiff still setting good lap times.
#69 Lamborghini which was placed in the new SP-Y class along with the team car was still running, but a long way down the order after a night full of hardship.

At the bottom of the top 50, the #43 Lexus had fallen to 3rd in SP8 Tohjiro Azuma struggling for pace in the fox.
Axel König in the leading production car #138 Porsche was nearly a lap clear of the rest of the V category cars running in 60th overall with 4 hours left.

As the clock strikes 12:00, the race director deemed the fog too bad and a red flag was called
3 and a half hours left, hopefully we can get some more racing this afternoon… *UPDATE* Cars released from the pits to grid up again at 13:15 (race must end at 15:30)