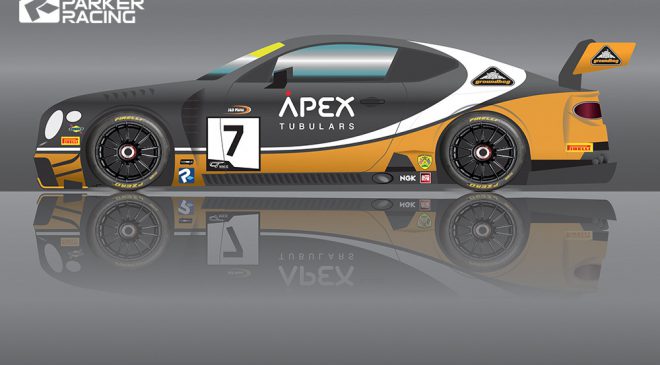 The news comes just over a month after the team initially confirmed it would enter the second-generation Bentley, which makes its domestic debut this year.

His connection with Team Parker stretches back to 2008 when they won Porsche Carrera Cup’s Pro-Am 2 title together. The Pro-Am 1 crown followed a year later before Geddie finished fourth overall in 2010.

The 28-year-old Scot confirmed his first taste of the Bentley would come at British GT’s Donington Park Media Day on March 5.

“It’s good to be back with Team Parker Racing as it’s where we started together in the Carrera Cup,” said Geddie, who split his 2018 season between competing in Porsche Cup Challenge Middle East and the BTCC. “I’ve not raced a GT3 car full-time since 2012 so to come back with Stuart is good because I know the team well and it will help me re-acclimatise. The Bentley has been a good car over the past few years and hopefully the new car will deliver for us.

“It’s a bit of a risk coming back after so long out but I’m looking forward to the challenge. I’ll be testing the new Continental GT3 for the first time on the Media Day. It is not ideal but we’ve got a number of test days lined up before the start of the season so we should be in good shape by the time we get to Oulton Park.”

Ratcliffe, meanwhile, remains with Team Parker for a second season after spending 2018 alongside Rick Parfitt Jnr. The pair scored a best result of second at Spa-Francorchamps before the 2017 champion opted to retire from British GT.

“As soon as I started driving with the team last year, I knew I wanted to continue with them and going elsewhere wasn’t an option,” said Ratcliffe. “I spoke with Stuart [Parker] at the end of last year and there was an option to do Blancpain, but I love doing British GT and when the deal came up to do it with Glynn, I bit Stuart’s hand off. The UK circuits are so challenging, and the cars are so big and fast, there is just something about driving the Bentley that gives me a thrill. I like the championship and the way it’s run and there are good quality entries.

“Glynn has proven in the past that he is quick. I’m looking forward to the new car; I drove it in August last year and it is awesome. It’s got something about it, and it’s definitely one of the most aggressive looking cars out there. Towards the tail end of last season, everything clicked, and I was enjoying driving the first-generation Bentley but I’m looking forward to getting out in the new Continental GT3.”