Tim Gray, driving the stunning VR Motorsport Praga R1T, took a convincing win in the opening round of the Championship, striding away from the field at the start, then responding to a late-race challenge.

The Praga had signalled notice of intent on the early-morning Free Practice session, but in Qualifying had to give best to the new Lamborghini Huracan of car owner John Seale and pro-driver Marcus Clutton, just half a second separating the two front-row starters, which the modest Clutton put down to luck as much as anything; “I was lucky to get a clear lap, it was handed to me on a plate, and I took it”. 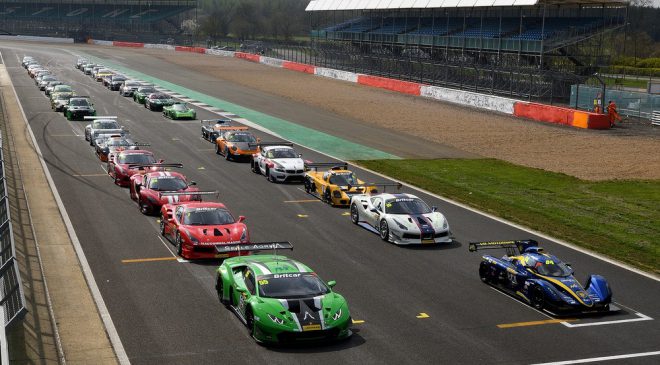 The Praga was away like a robber’s dog when the red lights went out and the pack was let loose, with Ross Wylie claiming second place, but there was considerable argy-bargy on the opening lap, which culminated in Richard Neary’s BMW GTR ending up on the outside of Club Corner with just three wheels. An immediate Safety Car deployment enabled lone drivers Chris Murphy (BMW Z4) and Barry McMahon (Alfa 156) to get their mandatory pit stops done and dusted early, while Tim Docker, who had somehow got his VW Golf up to sixth place in the first-lap mayhem, did the same.

Once the caution was lifted, five laps in, the VR Motorsport Praga started to stretch it’s lead over Wylie’s Ferrari, who similarly was pulling out a gap on Lucky Khera’s McLaren 650s, which had got the jump -just – on John Seale’s Lamborghini. Behind them it was very close train of cars – Paul Rose’s Saker, Wayne Marrs’ Ferrari, Ben Sharich’s Taranis, Marcus Jewell’s Porsche and Kevin Clarke in the ING Sport BMW Z4. Read that again – what a line-up!

In the packed Class 4 it was intense too – Ollie Taylor’s SEAT led the similar machines of Martin Byford and Max Coates, while Piers Reid’s BMW was challenging the Mercedes of Mark Murfitt. The luckless Paul Calladine was pitbound though, his Ginetta G50 stuck in third gear.

Mike Moss had an engine seizure in his BMW 1M, which sent him careering into the gravel at Club Corner, and into retirement.

Seale was the first of the front-runners to make his mandatory stop, handing the vivid green Huracan over to pro-driver Marcus Clutton at the earliest opportunity, whilst a few early-stoppers left it just a minute or so later. Leader Tim Gray pitted the Praga at the 30-minute mark, as did Max Coates, handing the SEAT to Guy Colclough for the full half-hour, whilst stretching the window a little further was Mark Cunningham, handing the family-run Porsche to dad Peter, Lucky Khera, who eked a tiny bit more of track time out of the McLaren before handing over to Lee Frost, and last of all, interim race leader Ross Wylie, who vacated the #7 Ferrari just on the cusp of allowable time, leaving David Mason to take it to the flag. Pitting with damage, though, was the #13 McLaren of Stuart Willson, having clashed with Paul Calladine’s Ginetta G50, an incident which saw both cars retire from the race.

The two JPR Motorsport Sakers, with lone drivers, Paul Rose and Steve Harris, were able to exert the rule of pitting 15 minutes from the end of the race, which they played, Rose pitting from a lead he had inherited by dint of staying out on track. Misunderstanding this rule though, was the CTR team, keeping Chris Bentley’s SEAT out on track and well into the overall top 10. Their late stop attracted a timed stop/go penalty which John Clonis had to serve.

At the front of the race, Gray in the VR Motorsport Praga had regained the lead after the pit stops had settled, but had to fight-off the challenge of Marcus Clutton, who had relieved Seale in the JMH Huracan, and was punching in a series of fastest laps on his way to easing the gap to the leader. The Praga, though, seemingly on rails as it cut through the slower cars (who, in turn, did a great job of allowing the low-slung, below-the-mirrors Praga some space), was able to respond, and the gap ebbed and flowed according to traffic.

As the clock ticked down, the ALP Racing Saker of David Brise and Alan Purbrick was forced into retirement, an exhaust gas temperature sensor indicating something might be amiss, whilst Paul Rose’s Saker suffered a broken driveshaft. 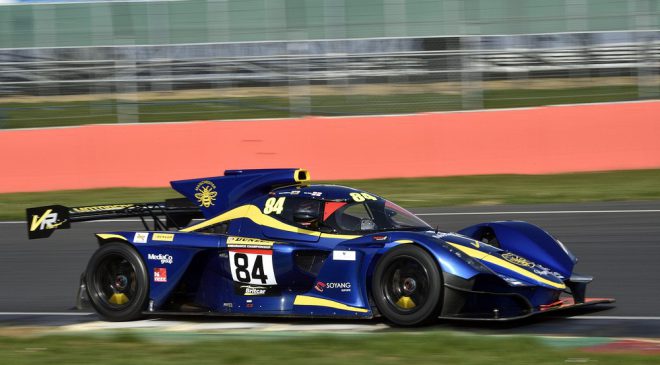 And so a new driver, new team and new car took the win in the opening round of Britcar’s 2019 season; Tim Gray, in the VR Motorsport Praga R1T, finished 1.853 seconds ahead of hard-chasing Marcus Clutton, with third overall, and in Class 1, being taken by the MacG Racing Taranis, which had always been in the hunt, and moved into serious contention when Jonny MacGregor consolidated Ben Sharich’s earlier solid stint. Fourth in class, fifth overall was the Kevin Clarke/Ryan Lindsay BMW Z4 – “the best of the rest” said a disappointed Clarke with a shrug of the shoulders – with Steve Harris upholding Saker honours in an overall seventh place. Luck played no part in Lucky Khera’s opening stint, but bad luck did affect Lee Frost’s closing session, a puncture relegating the McLaren to 14th place, but nevertheless a really impressive performance from the two drivers, and the engineering prowess of Simon Green Motorsport, proving they are serious contenders.

Wayne Marrs and pro-driver Charlie Hollings secured the Class 2 win in the JMH Automotive Ferrari 488, ahead of returnees Paul Bailey and Andy Schultz, the “old firm” back together and looking good for the season ahead in the SB Race Engineering 488, while David Mason and Ross Wylie took the final class podium place in the similar FF Corse machine.

The Class 2 result was an all-Ferrari affair, and similarly Class 3 saw Porsche domination, the win going to Adam Knight and reigning GT Cup champ Adam Hatfield’s Valluga Racing 991, which finished a little less than 10 seconds ahead of the Track-Group 997 of Marcus Jewell and Lewis Plato, while the Britcar old guard was still in contention, father and son duo Peter and Mark Cunningham enduring a smooth and trouble free run to third in class in the SG Racing 997.

Class 4 was the most numerous, and whilst the Invitation-entry Mercedes of Mark Murfitt and Michael Broadhurst took the win, some fraught racing culminated in a close finish for the points-paying places; lone-driver Sam Alpass, in the Geoff Steel-run BMW M3, after taking an early stop under the Safety Car, and despite a momentary lapse, was looking good to take the honours, but the Maximum Motorsport SEAT had been assertive all through the race, and Stewart Lines, having taken over from Ollie Jackson, wasn’t seeing failure as an option. It happened on the very last lap, and under as second separated the green and white SEAT and the works-liveried BMW at the flag. Marcus Fothergill and Dave Benett, more comfortable in their new class, brought the Bespoke Racing Porsche home next up, ahead of Tim Docker’s Golf, Guy Colclough’s SEAT and Ash Woodman’s similar car, Woodman’s late-race charge causing Colclough to respond. Piers Reid was fifth in his Butler Motorsport-run BMW M3, while stable mate Jasver Sapra was eighth in his “filing cabinet grey” liveried M3, the pair being split by the penalised Bentley/Clonis SEAT and the Team BRIT Aston Martin of Martyn Compton and Warren McKinlay, whilst teenage newcomer Moh Ritson was finding his feet in the senior league, expertly coached by Sarah Moore in the Tockwith Motorsport Ginetta G50.

Barry McMahon had drawn first blood a week earlier, taking a win in the Alfa Romeo championship, and continued his winning ways with the Class 5 win here, three laps ahead of the Rob Baker/Lucas Nanetti Smart 4/4 , with Chris Murphy’s Whitebridge Motorsport BMW Z3 third, followed by the Honda Civics of Arthur McMahon and Andrew Stewart – it was good to see Class 5 back up to strength with some serious racing again.

The next Britcar races of the 2019 season will take place on Silverstone’s Grand Prix circuit on 27th April.