In intermittent sunny and cloudy conditions for the late-afternoon race, Paul Bailey and Andy Schulz confirmed their dominance of the day in the SB Race Engineering Ferrari 488 Challenge with a convincing win.

It could have been so different though – despite pre-race predictions that the “aero” cars – the Praga and the Sakers – would struggle to compete on the tight confines of the Indy circuit, this was proving, rain or shine, not to be the case, and Paul Rose accentuated this by taking the lead as the red lights went out at the start. Ross Wylie, though, was in no mood for discussion, and from the third row of the grid, easily took the Class 4 machines ahead of him, then Bailey’s similar Ferrari, to be in second place at the end of the first lap, then claim the lead from Rose’s Saker in an audacious move through Graham Hill Bend on lap three. All was not well with the Saker though, and it pulled off at the back of the pits on Cooper Straight, to be towed in by the recovery truck. This left Bailey in second place, ahead of a charging Lee Frost’s Ginetta G55, with back-row starters Alastair Boulton (Praga) and Mark Cunningham (Porsche) cutting through the pack, taking on the Neary’s BMW in the process and establishing the true Class order.

With the Safety Car deployed to rescue the stranded Saker, lone drivers Tim Docker, and Graham Roberts in the EDF Ginetta G50, took early mandatory stops, and at the restart, after just three laps, Mark Cunningham’s Porsche got the jump on Boulton’s Praga into paddock. But Lee Frost’s G55 wasn’t co-operating, and it took a few laps for the Porsche to get by, with the Praga taking the opportunity next time round. It was Boulton’s pursuit that livened up this sector of the race – Cunningham was no easy target, and neither was second-placed Bailey, but once through, the Praga set about whittling down the 15-second lead of Wylie’s Ferrari ahead.

Ash Woodman had gone off into the tyre barrier by the medical centre, and not wanting to risk further damage to the SEAT Cupra, he elected to leave the car in-situ, satisfied that it was a safe place. Paul Rose had by now rejoined in the Saker, the stuck throttle that caused his stoppage now fixed, though 10 laps had been lost.

The Safety Car was deployed again, this time to recover Sam Neary’s BMW, which was in the Clearways tyre barrier. Just a little early for the two-driver mandatory stops, but lone driver Piers Reid seized the opportunity, and so did Steve Burgess in the RAW Motorsport Ginetta G55. Would they stretch the pit stop so that Ben Dimmack rejoined with the statutory 36 minutes left on the clock? No, they didn’t, they were just 5 seconds out of kilter. No immediate response from the blueshirts in race control, though you sensed there was a penalty looming. A pit stop this early compromised those with the faster driver/not-so-fast driver pairings, but most took it anyway, which is where the Bailey/Schulz advantage came into play.

Amazingly, Piers Reid’s BMW was in first place when the Safety Car was withdrawn, though he was immediately penalised with a drive-through and dropped to third, which left Dimmack’s G55 in front – though with a potential penalty on it’s way – ahead of Andy Schulz’s Ferrari, squeaky-clean penalty-wise so far, and Craig Williams, now having replaced Boulton in the VR Motorsport Praga, looking to take third position off of Reid. And it was another trademark close pass by Williams, at Paddock, perhaps not realising that the low-profile Praga would be unsighted in the mirrors of a BMW. Lee Frost took Reid too, at Surtees, restoring the Class-order at the front of the race.

Schulz, too, was on the move, and took the lead from Dimmack at Druids, a lead that he would take to the chequered flag some 30 laps later. 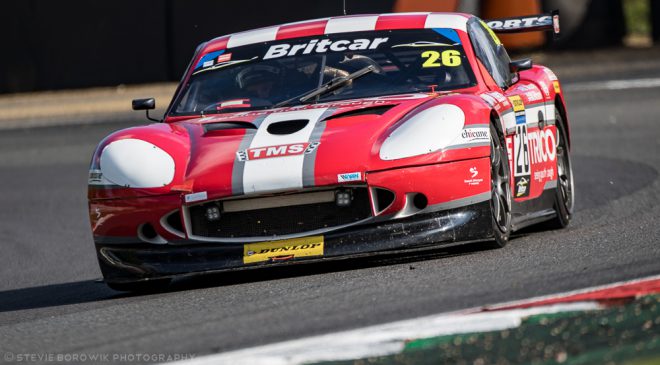 Grant Williams was now pursuing Dimmack’s Ginetta for second place, but this time the notorious close-pass didn’t come off; there was contact at Surtees that sent the Ginetta careering in a straight and very bumpy line across the grassy infield towards Clearways. Both cars were on their way again, Dimmack straight back into the race, but the Praga pitted for inspection before rejoining.

The squeaky-clean image of the leading Ferrari was tarnished a little – the officials had noticed something untoward, and a stop/go penalty was awarded, duly taken by Schulz whilst maintaining the lead. Now the battle for second place intensified, the G55s of Frost and Dimmack skirmishing causing a problem for Williams, who was hurriedly trying to unlap himself as the clock ticked down, while Rob Gilham (SEAT), Martin Compton (Team BRIT Aston), and Moh Ritson’s Ginetta G50 were creating a busy situation around David Mason’s Ferrari.

So when the flag fell, after 68 laps, it was another win for Bailey and Schulz, who played the race perfectly, taking advantage of the early Safety Car. Ben Dimmack was second on the road, nearly a lap adrift, but the officials awarded a 30-second time penalty post-race, which demoted the RAW car to third, behind Lee Frost’s similar machine. Nevertheless, it had been a mega performance from Dimmack, to fight back after the clash with the Praga, and he was nominated as Britcar Driver of the Day.

Piers Reid was a worthy winner of Class 4 in the smart Butler Motorsport BMW M3, ahead of similarly sensational Graham Roberts in the EDF-run Ginetta G50, the most solid performance in the car so far being rewarded with Sunoco Driver of the Day, while Peter Cunningham brought the SG Racing Porsche started by son Mark home sixth overall, third in Class 3. We go down to seventh place to find the first Class 1 finisher, the VR Motorsport Praga of Boulton and Williams, and Tim Docker salvaged the weekend with a third place in Class 4 in the Maximum Motorsport VW Golf, ahead of late-race squabblers CTR ‘s SEAT and Team BRIT’s Aston Martin, with the Sarah Moore/Moh Ritson Ginetta G50 a lap back, while the Safety Car timing didn’t fall in FF Corse’s favour, David Mason having to do a longer-than-usual 36 minute stint and slipping out of contention, a situation which putting Wylie back in for 10 minutes or so wouldn’t have remedied the Class position. Last finisher, despite setting the fastest lap in Class 1 as he fought to unlap himself from the field after the early race issues was Paul Rose in the JPR Motorsport Saker.