The IMSA WeatherTech SportsCar Championship once again proves stability with their 2020 race schedule.

The season starts out with the Daytona 24 Hours, with all four classes participating. There is however a small change, since the LMP2 category doesn’t race for overall season points in the Championship, in that specific event. The race is still counting towards the Michelin Endurance Cup, consisting of Daytona, Sebring, Watkins Glen og Petit Le Mans.

All classes won’t be present at all 12 rounds. In Long Beach we only have the Pro categories, i.e. DPi and GTLM. We won’t have any LMP2 og GTLM cars in Detroit, since most of them most likely will be in France for the Le Mans test weekend, which is run on the same weekend as the North American race weekend.

Lime Rock Park and Virginia International Raceway will be GTLM and GTD only races, since the tracks are so narrow and short, that it could be problematic to let Prototypes loose on the same tarmac, at the same time.

The season goes from January until October, and will miss – as it currently stands – the FIA World Endurance Championship and European Le Mans Series rounds – other than Sebring of course, where both FIA WEC and IMSA once again will share the event for another Super Sebring, with a race on Friday and another on Saturday.

IMSA has chosen to keep the LMP2 category alive, which will once again count towards the Jim Trueman Award, for the best amateur driver in the category. The winner will be handed an auto entry for the 24 Hours of Le Mans in 2021. The organizers are hoping to attract international teams for the 24 Hours of Daytona, since the FIA WEC cars are on the American continent anyway, with the 6 Hours of Sao Paolo being run one weekend later. But we don’t know if any of the teams dare taking a chance of a 24 hours race so shortly before a World Championship round. But we won’t know that for sure until the days post New Years eve, when the entry list for the 24 hours race usually is published.

The short races of the season (minus Long Beach) all counts towards the WeatherTech Sprint Cup, where it’s possible for teams to just participate in those rounds, and still clinch a championship. 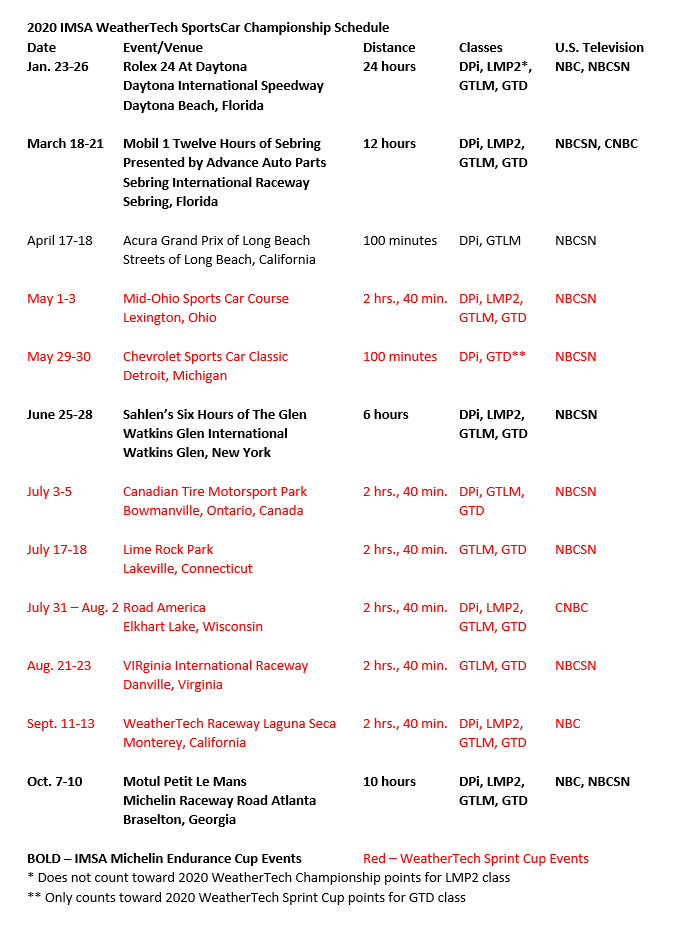