294 days, that’s how long it has been since the last BTCC race meeting. The recent, and continuing Covid19 has pushed back the start of the BTCC season by over 4 months, but finally, it’s back for the opening round at Donington Park.

There was drama before the weekend began however. A late decision by the UK government’s Department for Digital, Culture, Media & Sports saw fans denied the opportunity to attend the season opener. Fans were disappointed, but due to a resurgence in Covid19 cases, Toca & MSV had no choice but to run the opening round behind closed doors. Further news broke that all August rounds of the BTCC will be closed to spectators following on from the UK governments decision.

In typical BTCC fashion, the battle was on immediately, Turkington, Sutton & Cammish furiously battled in the early going with Tom Ingram’s Toyota in hot pursuit, now running under the Gazoo Racing GB banner. Lap four saw the battle come to a head, Ash Sutton bravely went round the outside of Turkington at Schwantz curve, but having left a small gap on the inside coming into Mclean’s allowed Dan Cammish to slot his Honda Civic into the gap.

Cammish clung on round the inside for dear life, baulking Sutton, Turkington & Ingram. The resulting concertina effect saw Ingram nudge Turkington who in turn made contact with Sutton, sending Sutton into a spin and losing and dropping out of contention. Rory Butcher in the new Ford Focus ST would capitalize, overtaking Ingram in the process.

The race was briefly interrupted by a safety car as Nick Hamilton beached his Team HARD VW Passat CC in the gravel, and to recover Senna Proctor’s Hyundai i30N which had broken down on the inside of Redgate.

It saw a last gasp four lap duel for the top 5 positions, Cammish would resist pressure from Turkington and a charging Rory Butcher to clinch victory. Tom Ingram would bring his Toyota Corolla home in fourth while Matt Neal rounded out the top five.

Race two saw Cammish start from the point with Turkington alongside, Cammish’s Honda, carrying 60kg of success ballast, struggled off the line against the rear driven BMW 330 of Colin Turkington, which saw the BMW sneak up the inside of Cammish to take the lead at turn one. Following this, Turkington didn’t look back and maintained his advantage until the chequered flag was waved.

The battle behind meanwhile, did not play out in the same manner. Cammish struggled to fend off the charging pack in the ballast laden Civic Type R. Running wide at Coppice, Cammish gave the opportunity for Rory Butcher to jump Cammish into second, the following lap saw Cammish fall prey again, this time to Tom Ingram & the second BMW of Tom Oliphant.

The race was briefly neutralised as Nick Hamilton bought out the safety car once again, this time spinning into the kitty litter at Coppice. The safety car period played into the hands of a fired up Ash Sutton, who was recovering from the rear of the grid after being spun out in race one. Sutton elbowed his way past Stephen Jelley’s BMW & Tom Chilton’s Honda Civic Type R.

Sutton set his sights next on the pair of Team Dynamics Honda Civic’s, making quick work of both Matt Neal and Dan Cammish. Further up the road, Oliphant managed to overtake Tom Ingram on the penultimate lap and as the chequered flag fell, Ingram very nearly lost another position to the charging Ash Sutton.

The close of race two saw Turkington take a commanding win with Rory Butcher in second & Tom Oliphant rounding out the podium finishers. Tom Ingram would take another fourth place finish ahead of a charging Ash Sutton after putting in a stellar drive from the rear of the grid. The reverse grid draw would see Chris Smiley start from pole in the Hyundai i30N fastback for race 3. 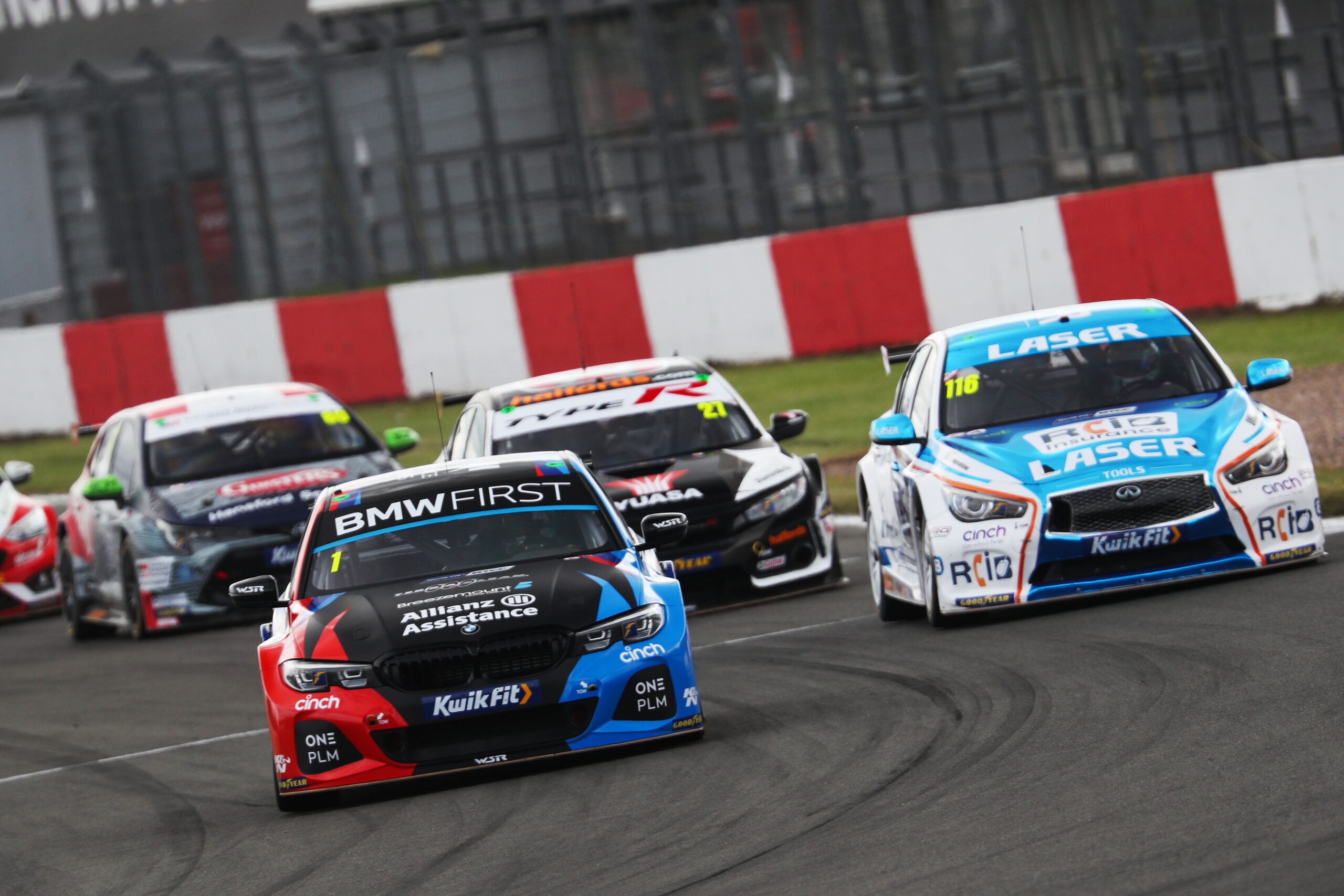 Smiley bogged down at the start from pole position, allowing Ollie Jackson in his Ford Focus ST to jump into the lead. Jackson slowly edged away from Smiley’s Hyundai, but a brief safety car intervention closed the pack up.

As the safety car peeled into the pits, Jackson continued to fend off Smiley, but it was becoming clear the top two were backing the rest of the field up. Josh Cook’s Honda Civic Type R was inches from Smiley’s rear bumper with the Mercedes of Adam Morgan forming a four car train. Jackson’s lead was short lived, as an audacious move by Smiley into the old hairpin saw Jackson lose momentum and plunge down to fifth position.

Ash Sutton meanwhile had latched onto the lead group, the first move came through Coppice which saw Sutton jump Adam Morgan into third, then it was Josh Cook who fell prey to Sutton’s charge on the following lap through the final chicane. Sutton pulled off an identical move on leader Chris Smiley on the following lap and roared off into the distance.

Sutton would clinch victory in race 3 after a challenging weekend, leading home Chris Smiley in second, Josh Cook in third, Adam Morgan in fourth and Ollie Jackson in fifth. 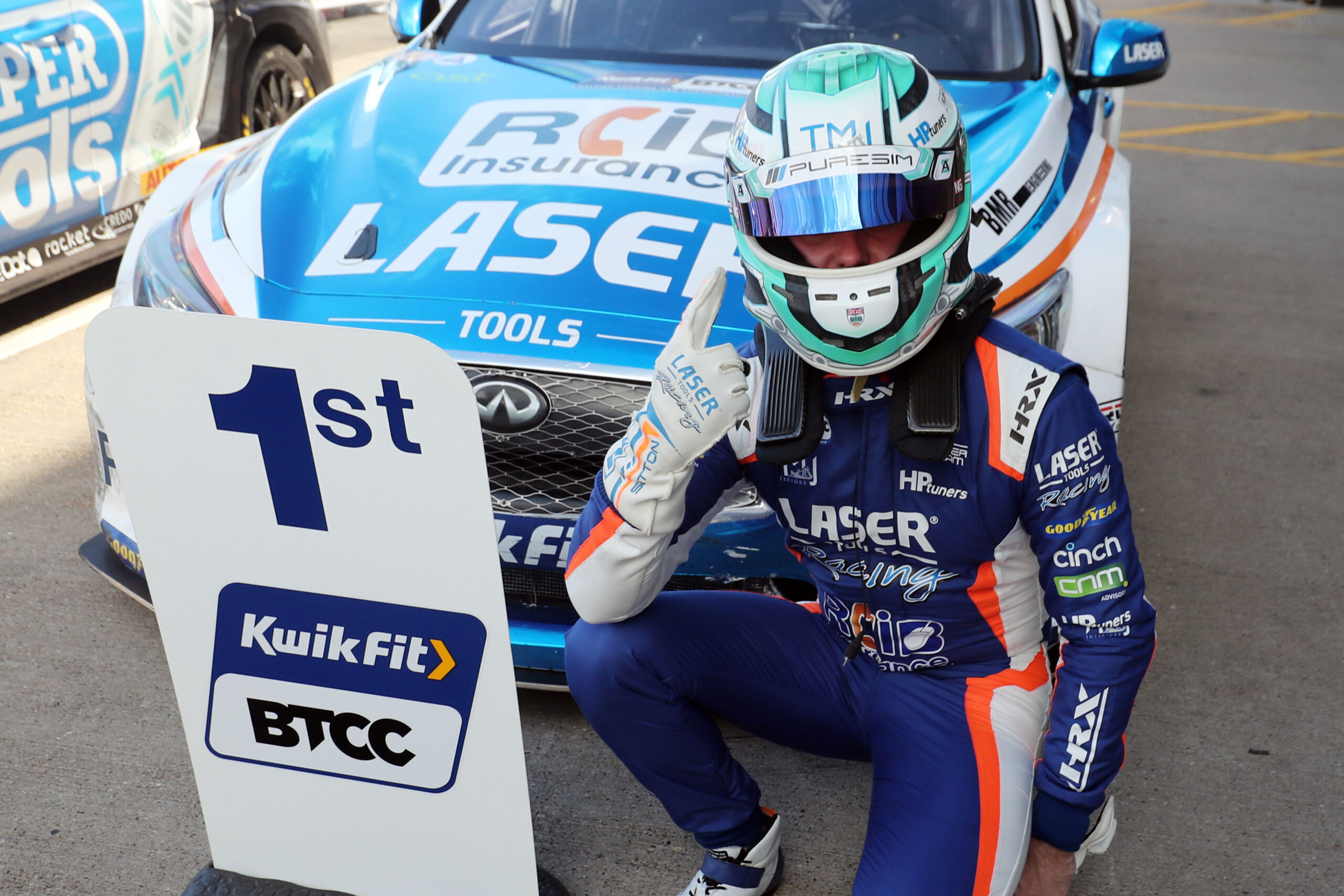 After the first round, Colin Turkington leads the championship with 46 points followed by Dan Cammish with 40 points, Ash Sutton & Rory Butcher tied for third with 37 points and Tom Ingram fifth in the points with 36 points.

The next round of the championship takes place this weekend at Brands Hatch on the 8th & 9th of August.