The third round of the 2020 BTCC season fires into life at the beautiful parkland circuit of Oulton Park in Cheshire. Once again, the BTCC being held behind closed doors due to the ongoing Covid19 restrictions. The weekend also saw the return of the PMR Vauxhall Astra to the grid, PMR announcing prior to the start of the post covid season they would only contest selected events. Mike Bushell fills PMR’s sole seat for the weekend.

Saturday saw a mix or wet and dry running, with Rory Butcher clinching a second consecutive pole position in the Ford Focus ST. Josh Cook lined up alongside Butcher in second place. Turkington completed the top three and Matt Neal lines up alongside.

On the grid formation lap for race 1, the weather suddenly changed. Heavy rain started to fall causing a last minute scramble on the grid as everyone switched from slicks to wet weather tyres. The cloud burst quickly soaking the Oulton Park circuit. Both the Audi S3’s elected to start from the pitlane, to avoid any first lap shenanigans in the mid pack.

After a short delay, the second formation lap got underway, but like clockwork the cheshire rain started to fall again. Rory butcher made a sublime start from the lead and held off the charging Colin Turkington. Josh Cook dropped down the order to fourth place, being overtaken by the BMW of Tom Oliphant. Stephen Jelley ran into trouble in his BMW, unable to take the start. He was able to restart from the pitlane.

Josh Cook meanwhile attacked Oliphant with vigour after making a poor start and losing out to the BMW’s of Turkington and Oliphant. After sustained attempts, Cook finally put the move on Oliphant at Lodge corner. Cook, driving like a man possessed in the rain, was able to overhaul Turkington’s BMW into Druids corner.

Ollie Brown meanwhile brought out the safety car as he went flying off the track at turn 1, bouncing off the tyre wall. Brown was able to get his car going again.

The safety car came after just two laps, Josh Cook attacking race leader Rory Butcher immediately. Dan Cammish meanwhile managed to sneak his way up the order into third. Cook managed to put a superb move on Butcher into turn one, with Butcher coming back at Cook, the pair going side by side through cascades. Almost immediately Cook pulled an advantage on Butcher.

Sutton and Ingram came to grief at Lodge corner, Sutton tapping Ingram’s Toyota into a lurid slide. Ingram managed to put a move on Adam Morgan into Old Hall on lap 11, after spending much of the race stuck behind the Mercedes. Ingram quickly set sail after being released from the Mercedes and was able to rapidly close onto the tail of Tom Chilton’s FK8 Honda Civic.

Post race, Josh Cook’s Honda came in for a bit of a knuckle wrapping, as the slightly dislodged splitter meant problems with the post race ride height check. It was a cruel blow which saw Cook stripped of race victory and disqualified from the result. Rory Butcher inherited race victory while Dan Cammish finished in second, Jake Hill in third, Colin Turkington in fourth & Tom Chilton rounding out the top five. 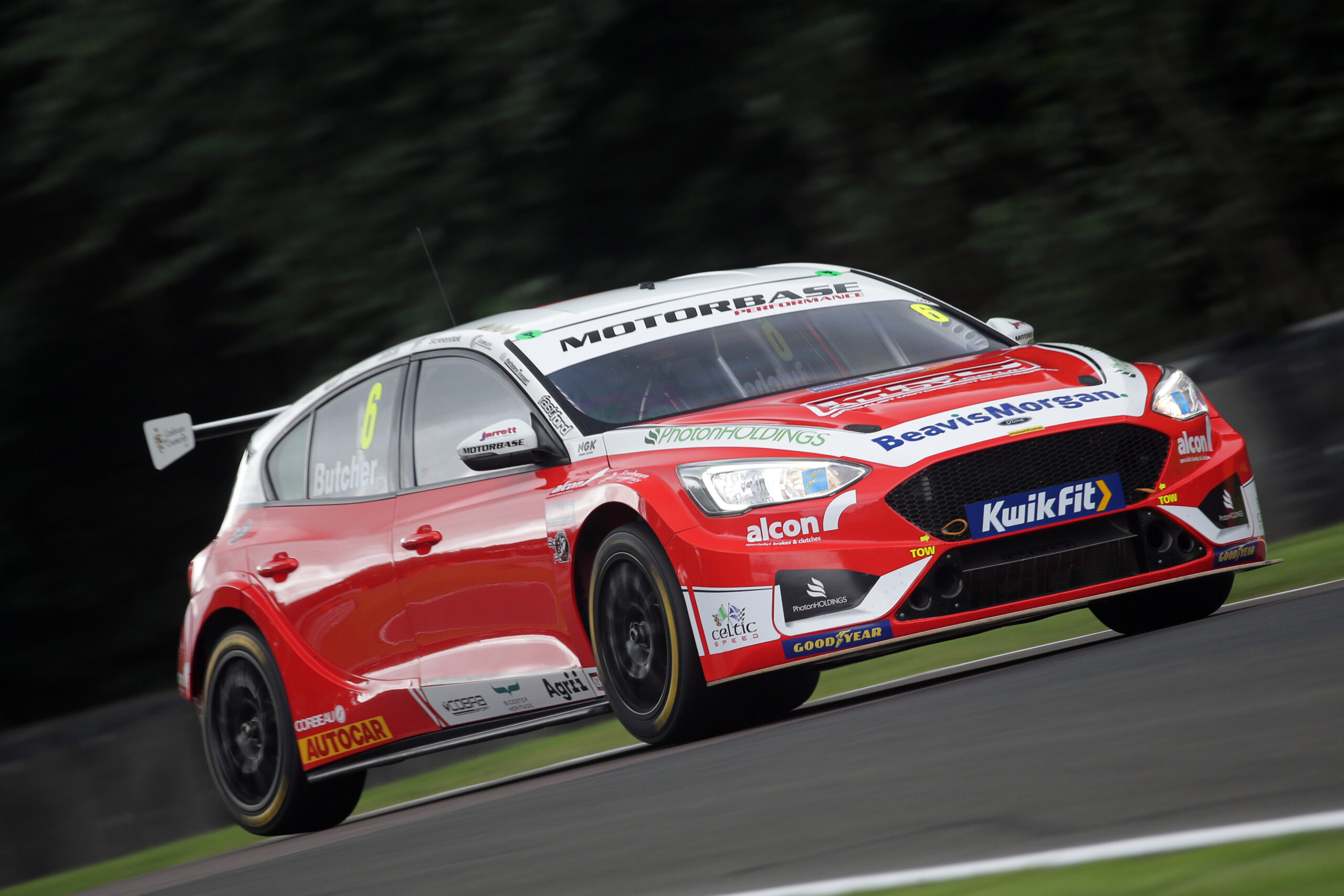 Race two sees Rory Butcher start from the point ahead of Dan Cammish in second. The track sodden from the sustained rain.

Butcher made a strong start for race two, pressing home his pole position advantage. Cammish meanwhile leapfrogged Turkington into the hairpin . Ash Sutton meanwhile made fantastic progress from the start, in the space of a lap and a half jumping up into fourth place, the 2017 champion putting in a stunning drive in the Infiniti.

Butcher, heavy with ballast steadily falling into the grasp of the chasing Dan Cammish, conditions still difficult with lots of standing water off the racing line. Mike Bushell spun off going down Cascades in the tricky conditions. Tom Ingram in his Toyota Corolla was starting to climb up the order, overtaking Adam Morgan & Tom Chilton.

Dan Cammish, Colin Turkington & Ash Sutton furiously battled amongst each other over 2nd, 3rd & 4th places. In the space of a lap, Sutton managed to put moves on Turkington on the run down to Knickerbrook & on Cammish under braking into Lodge corner. Sutton quickly set off in hot pursuit of leader Rory Butcher who managed to pull a 1.7 advantage as Cammish, Turkington & Sutton battled behind.

It only took Sutton one lap to close right onto the tail of Rory Butcher’s Focus ST. A few corners later and as Rory Butcher ran wide at Old Hall, Ash Sutton swept past Butcher with ease. Josh Cook, following his disqualification from race one was quickly climbing up through the order. Further down the order, Tom Oliphant finally managed to overtake Adam Morgan’s Mercedes for 8th place after applying huge pressure to the experienced Morgan. Dan Cammish in second resisted tremendous pressure from a chasing Colin Turkington. The front wheel drive FK8 Honda Civic Type R & the rear driven BMW 330 evenly matched. Ingram had finally put a move on Jake Hill for fifth place after a long battle.

Cammish buckled under pressure from Turkington, who ran wide at the hairpin allowing Turkington to get a run on Cammish and power past. A recovering Josh Cook meanwhile, who had charged up to 13th position, got railed by his team mate Michael Crees at Knickerbrook, tagging him into a spin and into the tyre wall

The reverse grid for race three will see Bobby Thompson in his Audi S3 starting from pole position for the final race of the day. There was drama on the warm up lap as Tom Ingram slowed coming to the grid with his Toyota Corolla running slowly, a broken driveshaft ending Toyota’s day early. Unlike race 1 & 2, the track had finally dried off.

Pole sitter Thompson had a torrid start and plunged down to fourth place in the space of two corners. Despite the track being dry, the low temperatures saw lots of people struggling for rear end grip. Michael Crees spun off at Cascades on lap one, damaging the front of his Honda and rejoining the track, very nearly getting collected by Jake Hill.

In the opening melee, Adam Morgan managed to jump into the lead followed by Tom Oliphant & Tom Chilton. Matt Neal meanwhile span off at Cascades, left with no choice but to limp back to the pits with an ailing Honda. Ash Sutton meanwhile had managed to overtake Tom Chilton who lost momentum after tangling with Colin Turkington at Knickerbrook. Josh Cook after a rotten weekend had already by lap 5 managed to climb into 11th place, challenging Aiden Moffat for 10th.

Morgan in the lead meanwhile was rapidly becoming a cork in the bottle, Oliphant & Turkington queuing up behind. The race though had started to settle into a calm rhythm after the mayhem of races 1 & 2. Tom Oliphant meanwhile let Colin Turkington past going into Lodge corner in a display of team orders to allow Turkington to have a go at attacking Adam Morgan for the lead of the race. This did have the unintended consequence of allowing Ash Sutton to catch up onto the back of Oliphant.

The fifth place battle started heating up as Senna Proctor started to apply pressure to Tom Chilton’s Honda, a strong showing for the Hyundai i30N. At the head of the field, Turkington had caught right onto the rear of Adam Morgan’s Mercedes, the venerable Mercedes A Class doing a fine job defending from the much newer BMW 330.

Stephen Jelley, Nicholas Hamilton & Ollie Brown brought out the red flags. Stephen Jelley spinning on the exit of Druids and being collected by Hamilton’s VW Passat & the following Passat of Brown running into the rear of Hamilton, harpooning Hamilton’s car into the barriers on drivers right.

Due to the already delayed schedule because of the rain earlier in the day, the race was declared early. Adam Morgan clinched victory with Colin Turkington in second, Tom Oliphant, Ash Sutton in fourth & Tom Chilton in fifth position.

At the close of the weekend, the championship leader is Colin Turkington with 141 points, Ash Sutton moves into second place with 122 points trailed by Rory Butcher in third with 100 points. Tom Oliphant sits in fourth with 99 points & Dan Cammish rounds out the top five with 92 points after another mixed weekend. 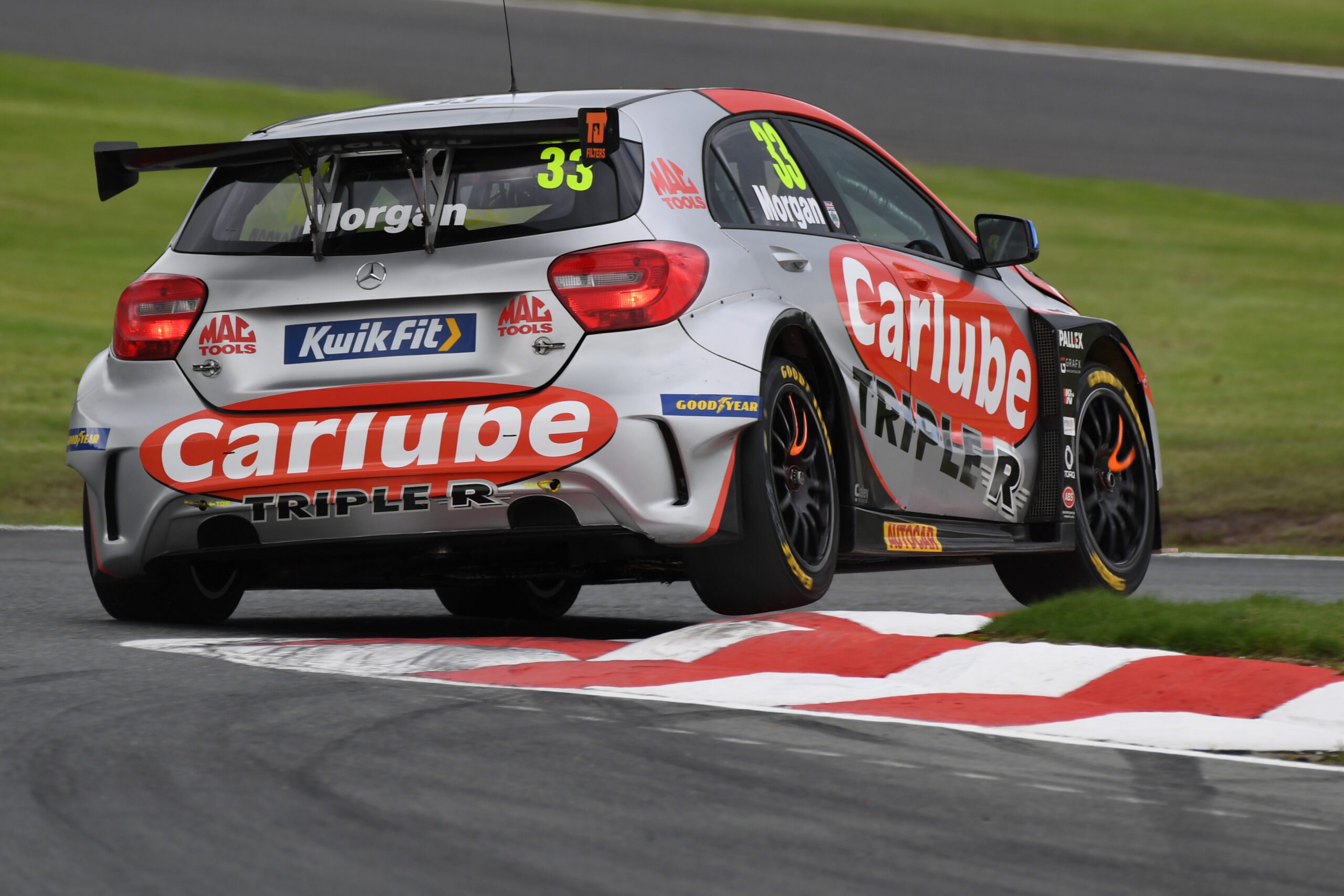