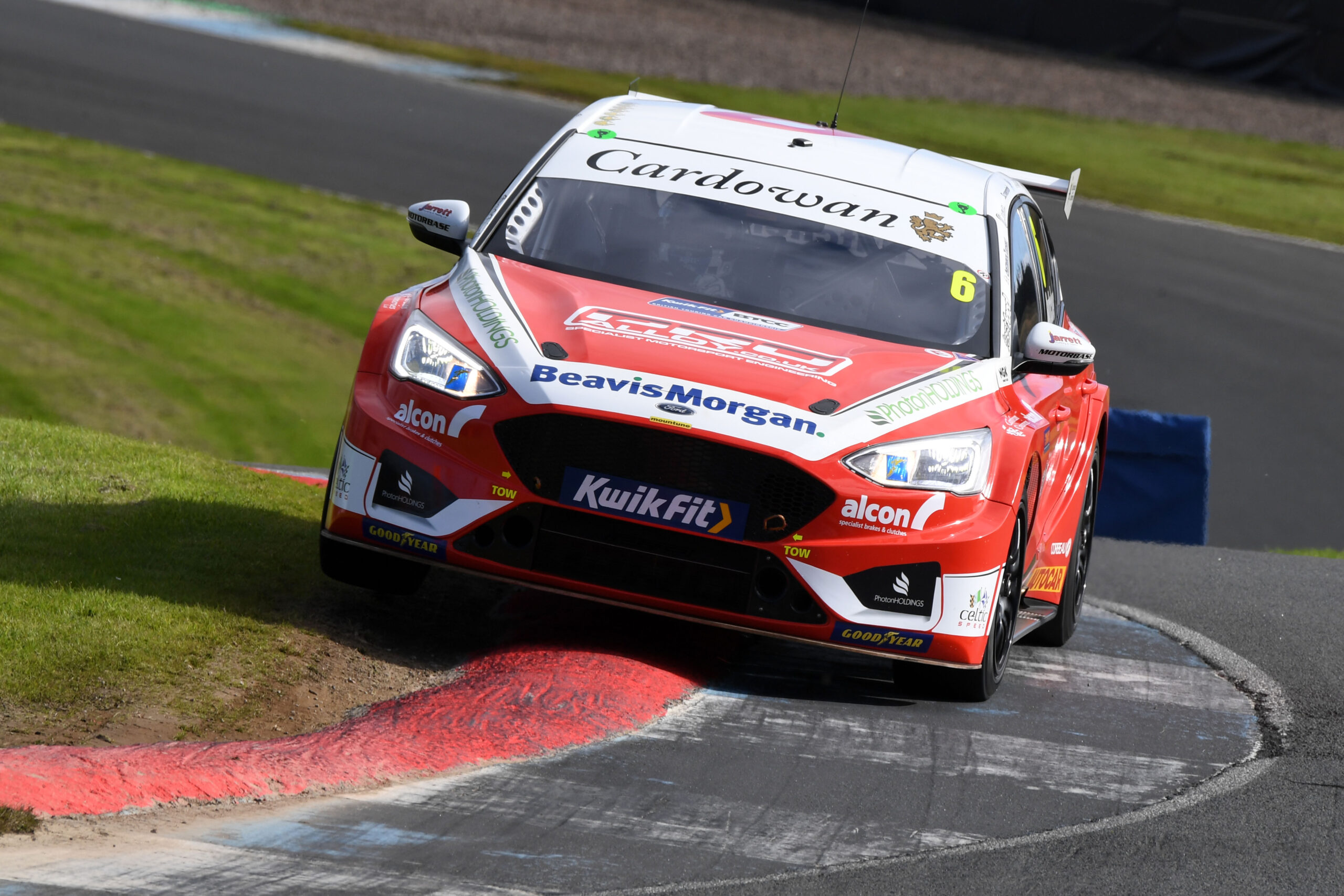 The fifth round of the 2020 BTCC championship sees the sole Scottish round on the championship, at the undulating Knockhill circuit.

Hill was able to challenge Turkington’s BMW 330 for second position briefly, but a charging Dan Cammish put in a great overtake on Hill’s Honda into the hairpin around the outside, giving Cammish third place. Cammish would continue his charge, attacking Turkington round the outside of the hairpin, but was shoulder barged into the gravel and dropped position to Tom Ingram, Rory Butcher & Jake Hill.

Josh Cook endured a miserable race, after a violent crash which completely destroyed the rear end of his Honda Civic. Cook spun after turn 4, going rear end first into the tyre barriers hard, completely destroying the rear bodywork & suspension. Cook’s trip into the scenery brought out the safety car.  Andy Neate & James Gornall came to grief as they collided behind the safety car, luckily, they were able to drag their respective cars back to the pits.

Race 2 sees Ash Sutton line up on pole with Colin Turkington alongside after an eventful race 1. The start saw Sutton defending straight away from Colin Turkington who made a better start, hassling Sutton’s Infiniti on the run down to turn 1. Drama was not far away, turn 3 saw Josh Cook, running in a freshly rebuilt car after a massive crash in race 1 punted off into the gravel.

The restart saw Sutton & Turkington gap the rest of the field. Behind, Jake Hill, Rory Butcher & Dan Cammish battled furiously. Butcher ran off the track trying to put a move on Hill who was lacking the pace of Butcher’s chasing Ford Focus.

Tom Ingram in third was driving the race of his life, managing to catch up to the back of Turkington’s BMW in just 2 laps, throwing his Toyota Corolla onto two wheels at almost every corner. Dan Cammish quickly attached himself onto the back of Ingram’s Toyota after clearing Jake Hill & Rory Butcher.

Lap 12 saw Andy Neate spin off into the gravel at turn 3, bringing out the safety car. The stewards handed out a 10 second penalty during the safety car to Matt Neal after he was judged to have jumped the start of the race.

Sutton made a minor error coming out the hairpin on the restart, allowing Turkington, Ingram & Cammish to close up. It wasn’t long before Sutton & Turkington were able to gap Ingram & Turkington, pressing home their rear drive traction advantage. Ingram found himself coming under increasing pressure from Dan Cammish, the Honda having a bit more pace than Ingram’s Toyota.

Ash Sutton took a second race win from Colin Turkington in second. Tom Ingram took the final step of the podium in third followed by Dan Cammish & Aiden Moffatt rounding out the top five, the result closely reflecting the result from race one.  The reverse grid draw would see Senna Proctor start from pole position for the final race of the day at Knockhill.

Race 3 would see Proctor start from the point, there was drama before the race began as Bobby Thompson was disqualified from race 2 and put to the back of the grid for race 3. Thompsons Audi S3 overboosting its turbocharger and falling foul of the regulations. The race start saw Rory Butcher jump Proctors hyundai into turn 1, pressing home the power advantage of the Mountune engined Ford Focus ST.

Dan Cammish snuck past Turkington on the opening lap. Mayhem ensued on lap two coming into the uphill left right chicane. Ollie Jackson spinning his Ford Focus and being collected by Mike Bushell’s Vauxhall Astra. Sam Osborne’s Honda Civic clipped the front of Jackson’s Focus, ripping the front left corner of the Civic clean off. The incident brought out the red flag, allowing for the recovery of the three involved cars and to clean up the huge amount of debris strewn across the circuit.

Jackson’s incident started a few corners back as he was rear ended by Adam Morgan’s Mercedes, the ensuing contact pushed the rear bumper of Ollie Jackson’s Ford Focus ST onto the rear wheel, causing it to lock. As soon as Jackson turned, it had the same effect as pulling the handbrake mid corner, sending Jackson’s car into a lurid spin which caused the resultant contact.

The race upon restart had been shorted to just 20 laps, which would restart with the qualifying grid order, meaning Rory Butcher would have to do it all again to jump into the lead. Once again, Rory Butcher made a stunning start, once again leapfrogging Proctor on the run down to turn 1. Tom Chilton meanwhile was making quick progress, in the space of 2 laps jumping up into the top 3.

At the front Proctor quickly gapped Proctor’s Hyundai who found himself coming under increasing pressure from Chilton’s Honda. The battle for fourth was hotting up, with Chris Smiley’s Hyundai unable to fend off the BMW of Tom Oliphant, who snuck past the Hyundai with Jake Hill & Dan Cammish taking advantage as well. Smiley quickly found himself under massive pressure again, this time from the chasing pack led by Aiden Moffat’s Infiniti, Turkington’s BMW & Ingram’s Toyota Corolla.

Tom Oliphant meanwhile managed to gap the cars behind him, catching onto the back of Chilton’s FK8 Honda, but quickly dropped back after running wide at the chicane, hemorrhaging time to Chilton’s Honda. Further down the pack, race 1 & 2 winner Ash Sutton still sat in 11th, desperately trying to find a way past the Toyota of Tom Ingram. Oliphant meanwhile had found his way back onto the tail of Tom Chilton’s Honda after losing time a few laps before.

Rory Butcher did briefly find himself subject of an investigation by race control, as it was adjudged he may have jumped the race restart following the red flag. The stewards decision eventually went in Butcher’s favour, meaning the win was retained for Butcher & the Motorbase Ford team.

At the close of the weekend, Colin Turkington continues to lead the championship with 182 points, Ash Sutton closes down on Turkington in second with 172 points. Rory Butcher sits third with 139 points after his race 3 win, Tom Oliphant is fourth with 130 points & Dan Cammish rounds out the top five with 125 points after a consistent weekend in his Honda.

The next race weekend is on September 19th & 20th at the fastest circuit in the UK, Thruxton. Until next time, stay safe.