The second round of the BTCC’s condensed schedule gets underway this weekend at the Brands Hatch GP circuit. It marks a change to proceedings, the precovid BTCC calendar would have seen round 2 taking place on the quickfire Brands Hatch indy layout; instead, the weekends racing will take place on the fast, flowing GP layout.

Race 1, under sunny skies and blistering heat saw a superb start for Rory Butcher from the pole, fending off the chasing pack into the rollercoaster that is Paddock Hill bend. Butcher pressed home his advantage, with the Focus ST working superbly in the broiling heat. Dan Cammish kept his Honda on the tail of Butcher’s Focus, but it was a challenge for Cammish to keep pace with Butcher’s lighter Ford.

Colin Turkington held station in third and was close to Cammish, but wasn’t really able to make a move on Cammish’s Honda. Teammate Matt Neal brought out the safety car after an overzealous move on Aiden Moffatt’s Infiniti, putting Neal out of the race.

As the race got back underway, it was set to be a three lap dash to the end, but disaster befell Rory Butcher. A front left puncture robbed Butcher of victory and plunged him down the order, handing the victory on a silver platter to Dan Cammish.

Race 2 sees the victor in race one, Dan Cammish starting from the point with Colin Turkington alongside. Colin Turkington made a fantastic start to take the lead of the race into turn one, cammish meanwhile bogged down badly and plunged down the order. Tom ingram meanwhile got past ollie jackson into the high speed sheen curve.

Chris smiley’s Hyundai i30N fastback went wide at sheen curve and dropped down the order in the early going. Further up the road, Colin Turkington and Tom Ingram meanwhile stole a march on the chasing pack, Ingram pushing Turkington’s BMW hard. Dan Cammish, after a disastrous start managed to find his feet and began turning the screw on Ollie Jackson’s Focus for third position.

Further down the order Michael Crees & Bobby Thompson came to grief at Westfield, Crees shoulder barging Thompson’s Audi S3, putting both of them off into the gravel and bringing out the safety car and compressing the grid.

After a long safety car interruption, Turkington made a strong getaway, gapping the Toyota of Tom Ingram. It didn’t take long for Ingram’s lighter Toyota to catch up and attack the BMW with Dan Cammish right up the tailpipe of Ingram’s Toyota. Further back, Ollie Jackson was a cork in the bottle in fourth as a gaggle of cars queued up, desperately trying to overtake. Tom Chilton put in a great move on Jackson for fourth, but a mechanical failure a few corners later saw Chilton’s race come to an unceremonious end, moments after Matt Neal entered the pits with an overheating, identical Honda Civic Type R. Neal’s issue was identified post race as a power steering failure.

Further down the order, Jake Hill’s engine expired spectacularly, a huge belch of flame and lots of smoke signalled the end for the FK2 Civic Type R’s engine.

Ash Sutton finally put a move on Ollie jackson for fourth place going into the final corner on lap 12, after piling the pressure on Jackson. Sutton quickly gapped Jackson in hot pursuit of third place Dan Cammish. Jackson’s teammate, Rory Butcher meanwhile had managed to launch his Focus ST up from 25th to 6th place, applying pressure to teammate Jackson in a ballastless Focus. Butcher made the move for 5th position into Paddock Hill bend.

Colin Turkington romped home to victory with Tom Ingram in second, Ash Sutton in third, Rory Butcher taking fourth after a stunning drive from 25th & Ollie Jackson in fifth. After his mechanical drama, Cammish was able to finish the race, albeit all the way down in 19th position. It marked a disastrous race for the Team Dynamics Honda’s, with Matt Neal retiring & Cammish’s mechanical maladies. 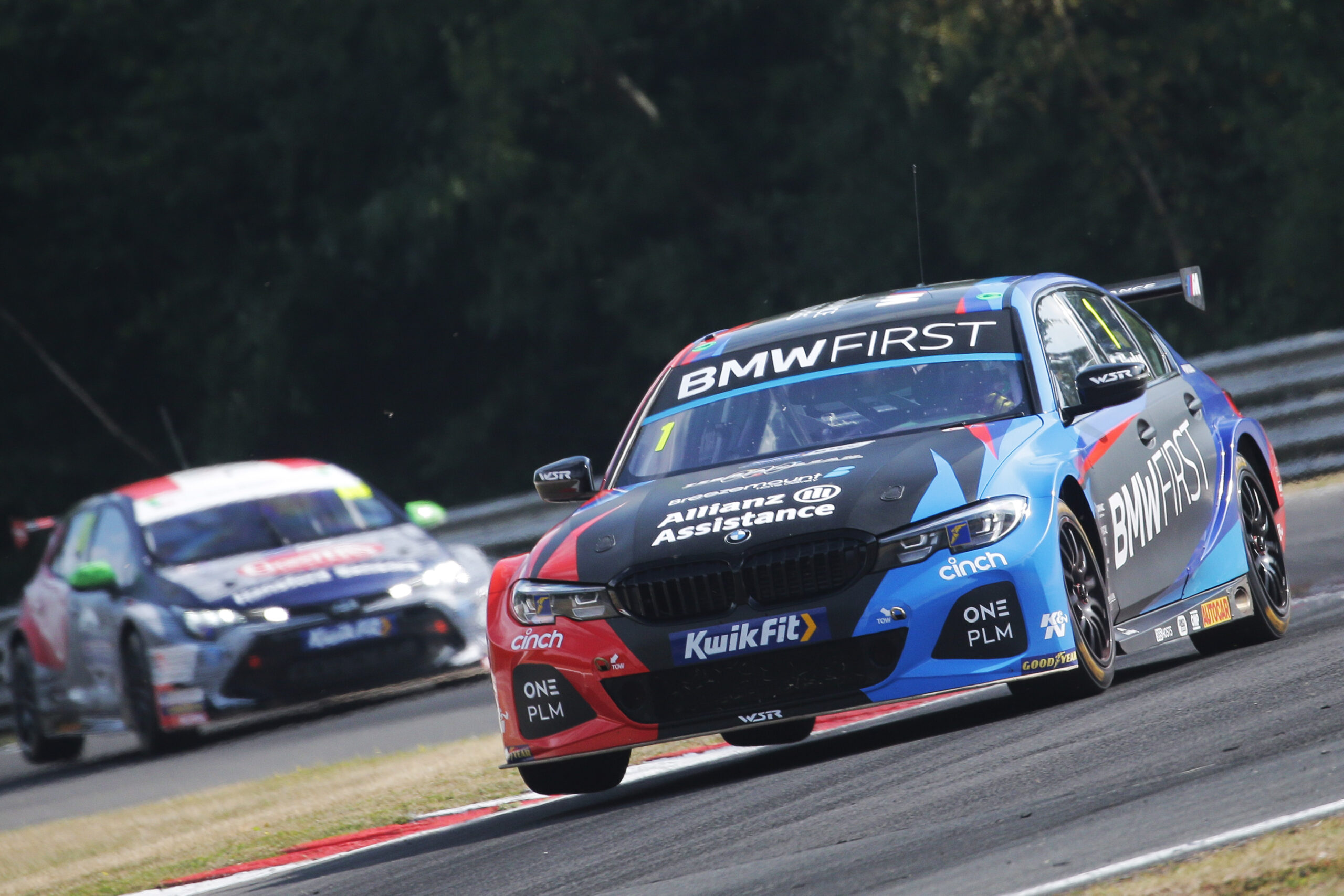 Aiden Moffat started from pole position and made a clean start, but mayhem ensued at turn 3, Jack Goff pitched into a spin and collided with Tom Ingram. Moffatt briefly held the lead, resisting pressure from Stephen Jelley, but a brilliant run from Tom Oliphant saw him overhaul both Jelley and Moffat into Paddock Hill on lap two.

Tom Ingram meanwhile, retired his Toyota on lap 6 after the damage caused on lap 1 became too much for the Gazoo Racing GB Toyota Corolla. Drama unfolded on lap 8 as Andy Neate spun off the track and Dan Cammish’s Honda Civic ground to a halt, retiring on the spot. A weekend to forget for Cammish. Teammate Matt Neal meanwhile, climbing his way up the order with Tom Chilton in tow after both had a disastrous race 2. Jake Hill’s luck ran out on lap 11, suffering a left front puncture, young Hill having no luck after blowing the engine on his FK2 Civic to bits in Race 2.

Third place Rory Butcher’s up and down weekend got a whole lot worse on lap 13, with another puncture dropping Butcher down the order and taking him out of contention for a podium finish. Chris Smiley, sitting in fourth place, came to grief after a high speed spin at the demanding Sheen curve, colliding with the barriers and destroying the front of his Hyundai. Moments after, Ollie Jackson in the second Motorbase Ford suffered a puncture going through Paddock Hill. Luckily, Jackson only under steered off into the gravel, having to limp back to the pits. A miserable race 3 for Motorbase with all 3 cars finishing out of the points.

At the close of the weekend, Colin Turkington continues to lead the championship with 95 points, Ash Sutton moves into second with 79 points & Tom Oliphant sits third with 70 points. Tom Ingram lies fourth with 67 points and Dan Cammish plunges down to fifth with 61 points after failing to score points in the final two races of the weekend.

Round 3 of the championship takes place at the picturesque Oulton Park circuit on the weekend of August 22nd & 23rd, until next time, stay safe.