The 67th edition of Mobil 1 Sebring 12 Hours Presented by Advance Auto Parts was a wet affair, which gave the classic race an extra drama. Besides its classic status, the race also counts as the second round of IMSA WeatherTech SportsCar Championship 2019.

The race started behind the Safety Car, since it had rained for the most of the night and intensified an hour before the race.

There was already a drama under the Safety Car, when Konica Minolta Wayne Taylor Racing Cadillac #10 pitted and stood still for quite some time, while the mechanics blew cold air into the car, before Jordan Taylor got sent back out.

Some of the GTD teams used the chance to put their bronze-rated drivers in the car, since it would still count in the minimum driving time.

After 40 minutes behind the SC, the race director restarted the race.

Tristan Nunez in Mazda Team Joest #77 took the lead by overtaking Dane Cameron in Acura Team Penske #6 from the outside in Turn 1, on the very first flying lap. Filipe Albuquerque in Mustang Sampling Cadillac #5 also went past the Acura shortly after that, quickly caught up with the Mazda, and overtook Nunez in the hairpin on the second flying lap.

Montaplast by Land-Motorsport Audi #29 had an off track moment in Turn 10 but was quickly back without problems.

Porsche #911 lost the lead in GTLM and fell back to seventh place. Antonio Garcia in Corvette Racing #3 had also lost a couple of positions since the start.

Kyle Masson in Performance Tech Motorsports #38 was flying and had driven himself up to sixth overall place, in an LMP2 car.

Acura Team Penske #6 pitted for fuel and a new set of tires. Both Acura DPi cars sailed backwards through the field and got overtaken by the GTLM cars before the pitstop.

Moorespeed Audi #19 had a little detour in Turn 17, but after setting the car in reverse gear, Wayne Hardeman could come back to the right direction.

The day just got worse and worse for Acura Team Penske #6. When they pitted, they drove too fast in the pitlane – and that resulted in a Drive-through penalty.

Simon Trummer in JDC-Miller Motorsports Cadillac #84 had a little tour on the grass, followed byTristan Nunez in Mazda Team Joest #77 a lap later.

BMW Team RLL #25 and Mustang Sampling Cadillac #5 had a contact in one of the fastest corners, but both cars could continue.

Konica Minolta Wayne Taylor Racing Cadillac #10 got a Drive-through penalty for speeding in the pitlane.

The rain stopped and the track had dried up enough, that the teams began to change to slicks two hours into the race.

Thus it got really busy in the pits, since all the teams went in and changed to slicks in a matter of minutes.

Shortly afterwards, there was a Full Course Yellow, when Mazda Team Joest #77 stopped on the back straight. Ironically, Timo Bernhard was behind the wheel – and with just as much flames from the rear as the same driver retired at the 24 Hours race at Daytona. Super pity for the Japanese/American/German team, that just didn’t have Lady Luck on their side. The car came back to the track a few hours later, but only for the team to use it as an extended test drive, as well as a little hope to score some points, in case some teams retired.

PR1 Mathiasen Motorsports #52 had to drive back to the garage, shortly after Anders Fjordbach jumped into the car. The left rear suspension was broken, so the mechanics went to fix it right away. It costed them about an hour in the tent, but it got ready again and Fjordback came back to the car.

Corvette Racing #4 got problems with the alternator belt and drive shaft, so they lost ten laps for the repairs.

P1 Motorsports Mercedes #71 got a Drive-through penalty for a mistake under a pitstop.

Ana Beatriz had a spin in Turn 1 in Heinricher Racing w. Meyer Shank Racing Acura #57, where she lost about half a minute, before the car came back to the right direction. The team was otherwise second in GTD when she spun.

Paul Miller Racing Lamborghini #48 had a problem with the gearbox, so the mechanics had to repair it.

The two AIM Vasser Sullivan Lexus cars came in contact with each other, when Patrick Frommenwiler drove into the rear of Frankie Montecalvo’s car. It ended up costing #14 29 laps, before Frommenwiler’s car back to the track.

After that the race fell into a quiet period, where there were three hours and 12 minutes of green flag, before the rain drops began to fall across the track.

It resulted in Mazda Team Joest #55 skated off the track under braking in Turn 13. When Jonathan Bomarito got pulled free from the tire wall, he could resume. So luckily he only lost two laps.

The cleaning and the two following pitstops costed 16 minutes, before the race got restarted.

Moorespeed Audi #19 had to crawled back to the pits and into the tent to get repaired. The mechanics however had to give up and hence we had the first official retirement of the day.

Precision Performance Motorsports Lamborghini #47 had a solo spin in the final corner – an action that was repeated by JDC-Miller Motorsports #84 a few minutes later.

Porsche #912 and JDC-Miller Motorsports Cadillac #84 came in contact with each other, in what got assessed as a race incident where neither driver got a penalty.

Shortly afterwards, Starworks Motorsport Audi #8 stalled on the track. The car couldn’t go forward and the team wasn’t sure if it was the gearbox or differential. It deployed the fourth Safety Car of the day to get the car removed from the track.

Meyer Shank Racing Acura #86 was even more delayed when the car hit some tools in the pits, and thus got a Drive-through penalty.

Performance Tech Motorsports #38 got a three minute and 58 second Stop & Go penalty, for making a mistake during the SC period and overtook some cars they should stay behind.

Turner Motorsport BMW #96 had to pit with one and a half hours left with a puncture on the left front tire. It had been a day with good and bad things and everything in between. Earlier in the race they were ahead, until they had to change a damper – and yet another puncture. However, they were only three laps behind the leader of the class.o 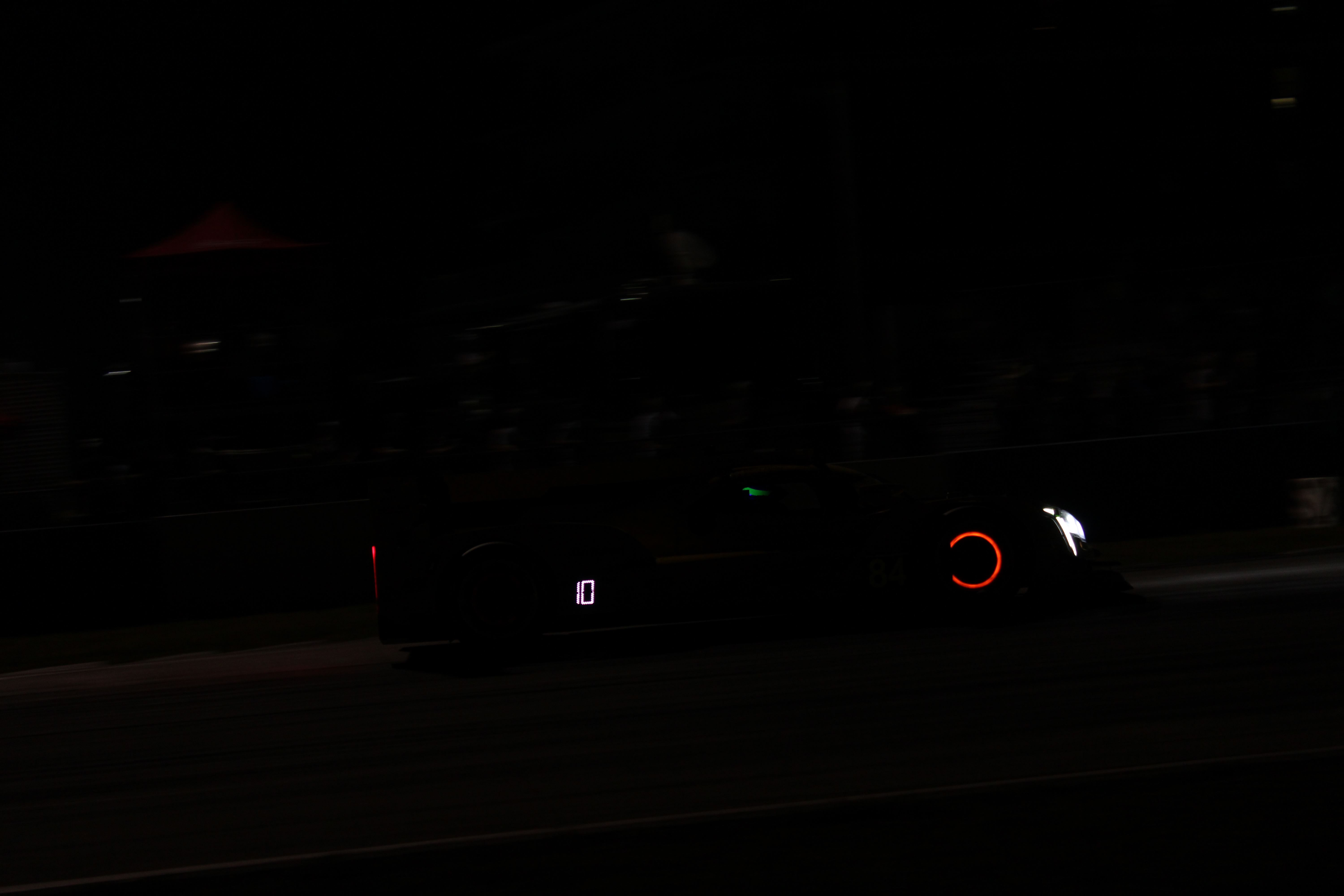 The DPi cars pitted for the last time with 35 minutes left, and top three was separated by only 16 seconds.

The GTLM cars started the last half an hour with five cars within 37 seconds of each other, where some of them didn’t need to pit again and some probably did.

The GTD cars also had a fantastic duel with eight cars within a minute, where some still had to pit and others could drive to the finish.

Felipe Nasr in Whelen Engineering Cadillac #31 drove max attack, with Jordan Taylor in Konica Minolta Wayne Taylor Racing Cadillac #10 right behind him. Nasr gave a little push to Laurens Vanthoor in Porsche #912 under an overtaking, but both cars stayed on the track.

Antonio Garcia in Corvette Racing #3 went past John Edwards in BMW Team MTEK #24, in the battle for fourth place in GTLM.

There was a drama with 16 minutes left on the clock, when Turner Motorsport BMW #96’s front suspension collapsed through Turn 2. Bill Auberlen couldn’t drive the car back to the pits, so the Safety Car had to be deployed in order to remove the stranded car.

The race got restarted with seven minutes left, and Nasr in #31 pulled right away from the rest of the field.

There was a drama amongst the GTLM cars when Ryan Briscoe in Ford Chip Ganassi Racing #67 spun around. Luckily nobody hit him, but the team lost a spot on the podium.

Performance Tech Motorsports #38 with Kyle Masson, Cameron Cassels and Andrew Evans won LMP2, ahead of PR1 Mathiasen Motorsports #52 with Matt McMurry, Gabriel Aubry and Anders Fjordbach. Only the two cars competed in the class this weekend.

The GTD class was won by GRT Grasser Racing Team Lamborghini #11 with Mirko Bortolotti, Rolf Ineichen and Rik Breukers, ahead of Magnus Racing Lamborghini #44 with Andy Lally, Spencer Pumpelly and John Potter, while Scuderia Corsa Ferrari #63 with Toni Vilander, Cooper MacNeil and Jeff Westphal finished P3. So far GRT Grasser Racing Team #11 has a 100% record for the 2019 season in IMSA, since they also won the race at Daytona.

The next round of IMSA WeatherTech SportsCar Championship will be run on the streets of Long Beach at 13 April, but only for the DPi and GTLM cars, since there’s not much space for the rest of the field on the narrow track, as well as the race will only be 100 minutes long.