There was excitement all the way until the final minutes in the ELMS opening race at Silverstone.

The 4-hour race had already delivered many battles and overtakings, but one and a half laps before the chequered flag we saw Filipe Albuquerque in the United Autosports #32 LMP2 car put in a decisive attack on Ryo Hirakawa in the G-Drive Racing #22. Hirakawa had previously built a gap of around half a minute that slowly but surely had been reduced. And with one and a half laps left of the race, Albuquerque went past the Japanese driver and claimed the first LMP2 winning trophy for the United Autosports.

The joy in the team didn’t get any less when their LMP3 car with number 2 on the side won its category. They were leading all the way from start to finish, and even with a spin for John Falb in the last hour of the race, he and Sean Rayhall drove an impressive race, which they won by 41 seconds to second place – and that was after leading by almost a lap. But the spin cost around half a minute before he was pointing to the right direction again, and some flatspotted tires after the spin ate into their advantage, too.

GTE saw a battle which lasted almost all race long. TF Sport #90 started the metallic blue Aston Martin V8 Vantage on Pole Position, but quickly fell backwards through the field. Spirit of Race #55 was leading the class, before TF Sport slowly but surely came back on top and finished the race with more than one lap to second place, which was Proton Competition #77 in a Porsche 911 RSR model year 2015. Beechdean AMR #99 had a bit of a yo-yo day too, where they started second i class. They fell back and were dead last, before they fought their way back up to P3. 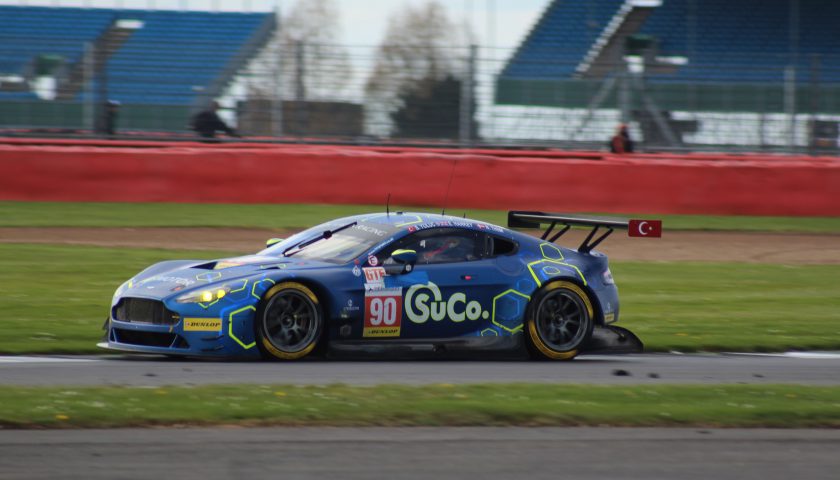 Spirit of Race #51 had a very bad day at the office. There were almost more off the track than on the track, and even hit the TF Sport #90 at a point of the race, sending both cars into a spin. They collected several warnings and even a penalty for the Andrea Bertolini, Giorgio and Gianluca Roda combo.

High Class Racing got a phenomenal start to their ELMS campaign. From 7th on the grid we saw Anders Fjordbach slice through the field, and lead the race before the first hour had passed. However, the trees don’t grow into the skies for the team, and especially the last few laps in Anders’ impressive double stint cost them a lot because the tires were too worn. Still they managed to do a really impressive third place, and even got the honour of being by far the best Dallara team, whereas Cetilar Villorba Corse #47 was second best in P6.

In fact there was three different chassis’s on the podium in LMP2 with a winning Ligier JSP217, ahead of an ORECA 07, followed by the “Danish” Dallara.

The Pole sitter in LMP3, AT Racing #9 didn’t have the pace spread across their full driver line-up with Talkanitsa Jr and Sr not being able to follow Mikkel Jensen’s pace. Still they managed to get home in a respectable fiftth place, and Mikkel managed to do the second fastest lap, only surpassed by the winner, Sean Rayhall.

The next time we will see the European Le Mans Series on track is in a month’s time at Monza, where the second round will be held on May 14th.